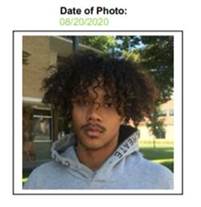 ​Synopsis: The Division of Youth Services is looking for juvenile escapee, Tashon Jessie AUSBORNE (DOB: 08/23/2001).  AUSBORNE ran away from Hilltop RYS in Grand Junction on 19 September 2020. AUSBORNE is described as a black male, 5'09", 140 lbs. AUSBORNE left in a 1980's red SUV with significant front end damage and broken driver side tail light. AUSBORNE is believed to be traveling to the Colorado Springs area. AUSBORNE ran away with another resident, Nathan BOOMSLITER, a white male, 6'01", 200 lbs. Both subjects are from the Colorado Springs area. AUSBORNE is known to have violent tendencies and is considered to be an escape risk.
​Manitou Springs Police and Pikes Peak Area Crime Stoppers Team Up to Track Vandals
MANITOU SPRINGS, COLO. (March 31, 2020) -- Manitou Springs Police and volunteers with Pikes Peak Area Crime Stoppers are asking for the public’s help in identifying the individual or individuals who, twice this week, shot out windows of vehicles parked on Ruxton Avenue.

Now is not the time for senseless vandalism. Time, resources and money are needed elsewhere. The price of replacing a car window could amount to a weeks’ worth of groceries, or more, for a struggling family.​

The police department is working to identify and apprehend the person/s responsible.
​
To that end, MSPD, in partnership with the COG Railway, is offering a $200 reward for information leading to the arrest of those responsible. 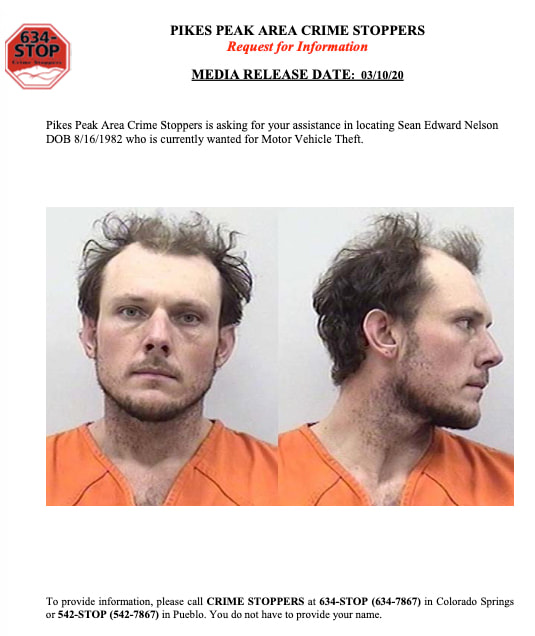 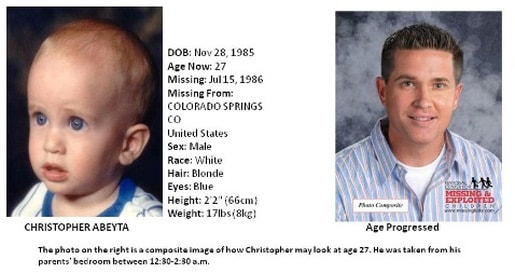 The Crime: On 07-15-86 at 0633 hours the Colorado Springs Police Department was notified of a missing seven month old named Christopher Enoch Abeyta.

The Investigation: The investigation revealed that seven month old Christopher was the youngest sibling in the Abeyta family. His mother, Bernice Abeyta and father Gil Abeyta recall last seeing Christopher asleep in his crib in the master bedroom at about 12:30 a.m. prior to falling asleep.

Bernice Abeyta noticed that Christopher was missing from his crib at 6:30 in the morning. The Abeyta's heard nothing or saw nothing suspicious that would indicate who committed this crime.

Their were no signs of forced entry, and the front door was said to have been unlocked to allow the older Abeyta children to enter the house without a key.

Hundreds of interviews were conducted and hundreds of leads were followed up on. Over the years the Abeyta family themselves have conducted a lengthy detailed investigation.

Above is a photo of Christopher at the time of his abduction, and a computer enhanced image of what he might look like today.

If you have information regarding this investigation please call: Detective Mike Montez at 719-482-7179
FILE Number 86-20515